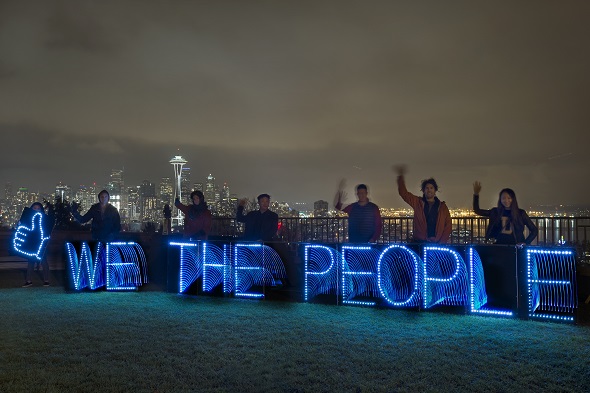 By Mark Engler
(Published in the April Issue of New Internationalist; Photo credit Backbone Campaign under a CC license)

Every so often we see an explosion of protest that propels an urgent issue to the fore of public debate. The global justice movement did this with the 1999 revolt in Seattle against the World Trade Organization (WTO). The Occupy movement did it in 2011. And #BlackLivesMatter has done it in the US over the past year and a half.

But do these mobilizations really create change?

The default stance in our society is to take refuge in cynicism: ‘Those protests didn’t do anything,’ the sceptics argue. Conveniently enough, it takes no evidence to assert this claim. And since most people do not bother to track progress on specific social issues, they are likely to nod their heads in gloomy assent.

Fortunately for those not wedded to pessimism, this position is often wrong.

Take the global justice movement. Almost a decade after the Seattle protests, a local newspaper writer quipped, ‘Remind me again what those demonstrations against the WTO actually accomplished.’

He meant this as a damning indictment. In fact, it mostly revealed his ignorance.

Those who cared to pay attention saw that the Seattle protests set off a revolt among representatives from the Global South within the WTO. The organization struggled for at least a decade to regain its former swagger. Arguably, it never has.

After further protests in Quebec City, Miami and Mar del Plata, Argentina, the pro-corporate dream of a creating a Free Trade Area of the Americas extending from the Canadian north to the Southern Cone collapsed entirely.

Around the same time, in 2005, advocates brokered a landmark debt cancellation agreement. This allowed countries in Africa and beyond to spend billions of dollars on their people’s needs, rather than sending the money to wealthy creditors. It also vindicated a major demand of Seattle protesters.

In the case of Occupy, the New York Times’ Andrew Ross Sorkin insisted on the movement’s first anniversary that it had been ‘a fad’ of little consequence. In truth, the outbreak of defiance that began on Wall Street and spread to some 1,500 encampments worldwide sent shockwaves that reverberate still.

In the months before Occupy, the US political class had been mired in debates about slashing government budgets. The outbreak of revolt changed that, training public attention on economic inequality, joblessness and the corruption of democracy by the wealthiest one per cent.

This shift had significant ramifications. ‘Millionaires’ Taxes’ – which had previously been considered political losers – passed in California and New York. California also enacted a Homeowner Bill of Rights, which the banking lobby had previously stymied. A major anti-union referendum was defeated in Ohio, with the rhetoric of Occupy framing the fight.

Years later, many of the same demands raised by Occupy Wall Street animated the insurgent campaign of Senator Bernie Sanders, confounding professional analysts who did not believe that an avowed democratic socialist could ever gain a receptive hearing in the US.

BlackLivesMatter is another movement making a tangible impact. Prior to the recent wave of disruptive protests, groups such as the American Civil Liberties Union regularly issued thoughtful reports with policy recommendations on how to reduce police violence in African American communities, curb discriminatory policing and reverse the militarization of local law enforcement. Year after year, these recommendations were ignored.

The problem was not a lack of policy ideas. It was a lack of pressure that could compel those in power to act.

The movement provided that pressure. In 2015, cities from Los Angeles to Cleveland to Baltimore ceded to activist demands on issues including community oversight of policing, body cameras on officers, and restrictions on the use of force.

BlackLivesMatter has certainly not accomplished everything that its champions have hoped. None of the social movements have – at least not yet. But they have nonetheless produced important victories http://www.sildalisonline.com/.

Amid a chorus of cynics, it’s up to us to claim them.