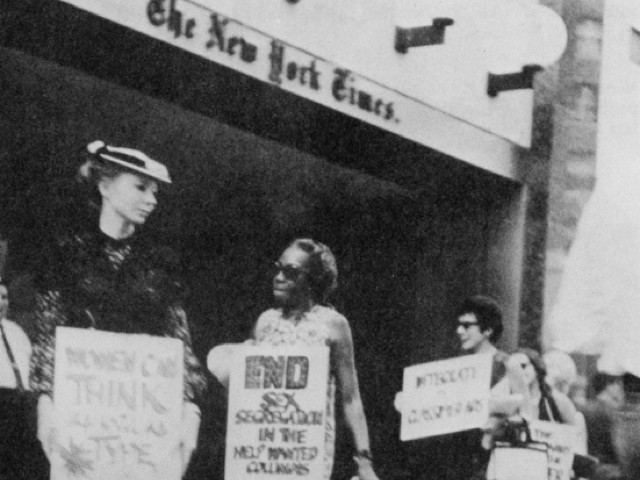 By Laura Tanenbaum and Mark Engler
(Published on August 30, 2017 in the New Republic)

Fifty years ago, on August 30, 1967, a group of protesters formed a picket line at The New York Times’s classified advertisements office at 1457 Broadway. Wearing suffrage-era costumes to suggest that the newspaper was behind the times, the women carried signs that said “I didn’t get my job from the Times” and “Women can think as well as type.” Their demand was that the paper end the practice of dividing job advertisements into “male” and “female” categories, a practice that produced starkly different offerings. Contrast this ad:

“Help-Wanted—Male: Airline opportunities. The aviation industry is one of the fastest growing in the world. United Airlines, as usual, is setting the pace. The reason for our leadership is the quality of the people who make up our airline. They are intelligent, competitive, and capable. Starting salaries are among the best in the industry.”

While ads for men promised family-supporting wages, opportunities for women tended to involve low-level office work. One call for a “Jill of All Trades” attempted to entice applicants with the suggestion that “occasional overtime at time & ½ will help fill your ‘Piggy Bank.’”

Lesser remuneration and condescension toward pay equity was not the only issue. Ads targeting women often specified the need for applicants to be “attractive” and “well-groomed,” and they emphasized qualities such as “a pleasant phone personality.” Moreover, although racially segregated ads were banned in 1965, papers maintained separate sections for “domestic female” help that were widely understood as targeting African-American women—an indication that racial and sexual discrimination continued to go hand in hand.

The picket against sex segregated job ads was one of the first major actions of a new body called the National Organization for Women. NOW had been formed the previous autumn at a conference in Washington, DC. Envisioned as an “NAACP for women,” the group set out to promote equality in the public sphere and a shift towards egalitarian marriages, along with greater access to health care, childcare, and pregnancy leave. By the summer of 1967, its members were ready to take on increasingly confrontational actions. “We picketed the Times,” remembered Muriel Fox, a founding member of NOW who was involved in the campaign. “It was one of our bitterest fights.”

The Times itself took note of the initial picket with an article on an inside page, accompanied by a photograph. However, it devoted more than half of the story to a response from newspaper vice president Monroe Green, who contended that the “advertisements are arranged in columns captioned ‘Male’ and ‘Female’ for the convenience of readers.” A subsequent article by New York Times Magazine writer Martha Weinman Lear described a meeting between the paper and NOW protesters, at which Times executives argued that integrating their ads would mean “fewer jobs for women because men would be applying for them.”

Nearly a year of continued agitation was required before such arguments lost their grip. At subsequent pickets demonstrators chanted, “The New York Times is a sex-offender!” As the campaign continued, women trained their sights on additional targets as well. In December 1967, NOW conducted demonstrations in five cities targeting the Equal Employment Opportunity Commission, calling on the agency to reverse its position that sex-segregated ads were not a form of illegal discrimination. On August 5, 1968, after NOW filed a lawsuit against the agency, the EEOC complied with protesters’ demands. It ruled that separate male and female help wanted ads violated the Civil Rights Act, except in cases in which sex was a bona fide occupational qualification. On December 1, the Times—along with the New York Post, the Daily News, and the Village Voice—finally announced that it would integrate its listings.

NOW’s picket proved influential in many respects. Along with actions such as the disruption of the 1968 Miss America pageant, it helped to kick off a whirlwind period of protest that marked the peak of what became known as second wave feminism. During this time, feminists held speak-outs to protest abortion restrictions, performed “Un-Wedding” ceremonies at the New York Bridal Fair in Madison Square Garden, and occupied the offices of the Ladies Home Journal to demand that women edit the magazine.

Today, help-wanted ads are no longer segregated by sex, and feminists secured real victories in breaking into male-dominated professions. Yet labor in the United States remains gendered. Some of the job classifications identified by the Bureau of Labor Statistics as the fastest-growing professions in our country remain female-dominated and low-wage. These include home health aids, whose average earnings in 2016 totaled just $22,600. Such care work is disproportionately performed by women of color and immigrants, who are vulnerable to abuse by employers. And because care work is still very much considered “women’s work,” the undervaluing of this labor contributes to the persistent pay gap between men and women.

In addressing such disparities, no amount of individual “leaning in” will substitute for collective action for labor rights. Recent organizing drives have garnered some important wins: In September 2013 advocates won a landmark victory when the Obama administration’s Department of Labor issued a ruling that extended minimum wage and overtime protections to home care workers. Unfortunately, these gains could be reversed by the Trump administration.  “We absolutely see the rule as under threat by the current Department of Labor,” says Almas Sayeed, General Counsel for the National Domestic Workers Alliance. “I have never seen such a hostile space for low-wage workers. The 2013 interpretation could be rolled back just by an agency decision, and that would impact more than 2 million workers.”

Already the department has announced plans to reconsider the Obama-era expansion of overtime pay, and advocates argue that protections are now widely unenforced. Moreover, in late March, over the objection of anti-sex discrimination advocates, Trump revoked the Fair Pay and Safe Workplaces order that Obama had issued in 2014 as a means of ensuring that companies receiving federal contracts comply with labor and civil rights laws.

As in 1967, a crucial lesson is that laws and regulations are only as good as the social movements that insist on their realization. When feminists began picketing The New York Times, sex discrimination in hiring was already barred through Title VII of the Civil Rights Act. However, the EEOC was unwilling to act aggressively to enforce the law. Aileen Hernandez, the only woman initially appointed to the commission in 1965, resigned in frustration after 18 months, later becoming the president of NOW.

A second lesson is that—as the picketers of 50 years ago and those organizing in today’s workforce have each recognized—the struggle is not merely about allowing some women to succeed in white-collar professions, but rather about improving the conditions faced by all working women. As the importance of care work continues to increase in our still-gendered economy, this idea grows more vital than ever.

About Laura Tanenbaum and Mark Engler

Laura Tanenbaum is an Associate Professor of English at LaGuardia Community College, City University of New York. Her writing has appeared in Jacobin, Dissent, Open Letters Monthly, and other publications. Mark Engler is an editorial board member at Dissent and co-author of This Is an Uprising: How Nonviolent Revolt is Shaping the 21st Century.

Gandhi’s Strategy for Success — Use More than One Strategy

Gandhi’s Strategy for Success — Use More than One Strategy

How movements can maintain their radical vision while winning practical reforms

André Gorz and the Path Between Reform and Revolution