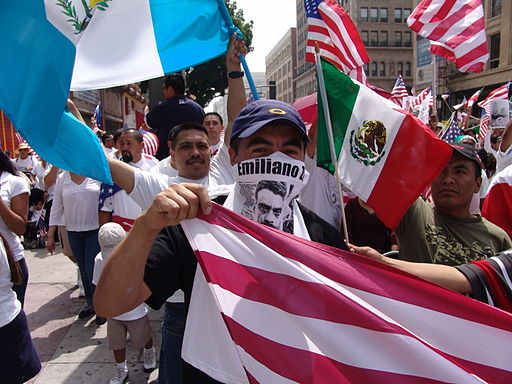 Ten years ago, on March 10, 2006, more than 100,000 protesters flooded Chicago’s downtown Loop. As the Chicago Tribune reported, “Urgent chants of ‘Si, se puede,’ or ‘Yes, you can,’ echoed off the walls of downtown skyscrapers” as the largely Latino crowd formed one of the largest demonstrations for immigrant rights in United States history.

That was just the beginning. Motivated by the prospect of the U.S. Senate passing the so-called Sensenbrenner bill — which, among other provisions, would have criminalized assistance to immigrants in the country illegally who were seeking food, housing or medical services — demonstrations cropped up in more than 140 cities in 39 states. Some of the largest events took place in Southern California, culminating in a May 1, 2006, “Day Without Immigrants,” when more than 500,000 rallied in Los Angeles to demand a pathway to citizenship.

Despite these remarkable turnout figures, the importance of these demonstrations is not always acknowledged. The bill proposed by U.S. Rep. F. James Sensenbrenner Jr. (R-Wis.) did not pass the Senate, but neither did comprehensive reform, leading many commentators to deem the protests a failure. In 2011, Fortune magazine used the demonstrations as an example of how mass movements “can peter out without achieving meaningful change.”

Popular uprisings, however, have ramifications that go beyond immediate legislative results. The use of nonviolent sacrifice, disruption and escalation can alter the climate of political debate. These strategies can change an issue seen by politicians as inconvenient or untimely into a matter that can no longer be ignored. By these measures, the 2006 movement had lasting significance.

Just as civil rights activists of the 1960s invigorated racist White Citizens’ Councils in the South, one of the effects of the 2006 protests was to activate hard-line anti-immigrant sentiment. Vigilante “Minuteman” groups proliferated along the Mexican border, and conservative state legislators in places such as Arizona, Georgia and Indiana passed extreme legislation targeting immigrants in the country illegally.

Yet this is only half the story. During the demonstrations, activists chanted, “Today we march, tomorrow we vote!” True to this vow, a galvanized Latino community created an ongoing crisis for conservatives at the polls, starting with the 2006 midterms. Conservative Miami Herald columnist Andres Oppenheimer wrote: “Hispanics said ‘adiós’ to President Bush’s Republican Party… voting in much greater numbers than expected for Democratic candidates in an apparent rejection of the ruling party’s efforts to blame much of the nation’s problems on undocumented migrants.”

Savvy Republicans scrambled to contain the damage. Presidential advisor Karl Rove showed up at a national meeting of La Raza, the country’s largest Latino civil rights organization, and attempted to distance the White House from anti-immigrant sentiment. Rove would later warn his party, “An anti-Hispanic attitude is suicidal.”

Many young people who tasted political power for the first time in 2006 went on to promote the DREAM Act — an effort to provide legal status for young immigrants who were brought to the country as children. By 2010, these DREAMers recaptured the spotlight. Mirroring LGBT advocates, they broadcast “coming out” stories about their status. They also organized marches, building occupations and traffic blockades to keep their cause in the public eye.

In a decisive move in June 2012, the activists began conducting hunger strikes and sit-ins in Obama for America campaign offices. As the New York Times commented, the president suddenly faced the real prospect of “alienating the Latino voters who may be pivotal to his re-election bid.”

Just weeks later — on June 15, 2012 — President Obama directed federal immigration authorities to follow new guidelines allowing young residents who met the DREAM Act’s criteria to receive renewable work permits. The action allowed as many as 1.2 million young undocumented immigrants to live and work freely in the United States. The president subsequently undertook even further-reaching actions, creating a mechanism for more than 5 million additional immigrants, including those who are parents of U.S. citizens, to remain in the country legally.

Conservative presidential hopefuls have pledged to reverse these measures. But, as Rove warned, the ever-growing Latino voting bloc now puts conservatives in an impossible bind. If right-wing candidates appeal to the anti-immigrant extreme in an attempt to win primary contests, they enter general elections facing an energized bloc of immigrant-rights supporters — and their anti-immigrant statements increasingly fly in the face of mainstream opinion as well.

In short, disruption has paid dividends for those whose chants echoed from city buildings a decade ago. And the 2006 immigrant-rights mobilization is not the only protest movement in recent memory to have shaken up politics. Occupy Wall Street and Black Lives Matter have animated public discussion of issues ranging from economic inequality, to labor rights, to police violence against people of color. They have already affected policy — from a “millionaire’s tax” in New York, to California’s Homeowners Bill of Rights, to the increasingly widespread mandate that officers wear body cameras — and we can expect that the ripples they send through political life will continue to expand.

Many of the last century’s major advances — from labor laws to civil rights to environmental protections — owe less to the politicians who haggled over the endgame of reform and more to the movements that put these social issues on the map, often via insistent and disruptive demonstrations. Looking back at the protests of 2006, we should recognize the dramatic display of public discontent by immigrant families and their supporters as a harbinger of changes to come.

Martin Luther King Jr. Was a Disruptor, Not a Peacemaker

Lessons from the Pledge of Resistance