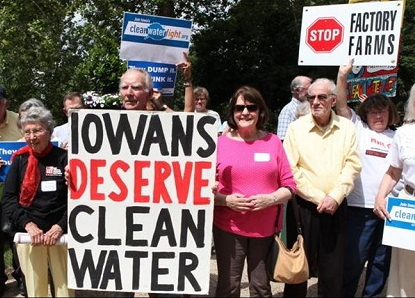 The craziness of the caucus season in Iowa has passed, but we remain far from the end of what already seems like an interminable election cycle. Amidst this cycle, we are constantly told that the future direction of our state and our nation will be determined by whom we elect and how skillfully they broker the types of backroom compromises that allow new legislation to be passed.

But is this really how social change happens?

Whether it’s progress on civil rights, ending child labor, or securing women the vote, history tells us that major advances in American life have come from citizens’ movements organizing from below rather than from timid politicians cutting deals on high.

Who sits in office at a given time matters. Elected officials, judges, and political appointees all play a role in determining what policies and regulations will be selected from within the limits of accepted political debate. But it takes social movements to change the political weather and alter the confines of that debate—pushing forward issues that otherwise go ignored and making them matters of pressing concern.

Occupy Des Moines, which set up camp outside of the State Capitol in the fall of 2011, was part of a national movement that changed a political discussion that had been focused on austerity and the “debt ceiling” into one about jobs, income inequality, and the unjust influence of the wealthiest 1%. These same themes have propelled the insurgent campaign of Senator Bernie Sanders, who defied virtually all professional pundits’ sense of the politically possible by leaving Iowa with roughly the same number of delegates as Hillary Clinton, then going on to win states including Michigan and Oklahoma.

The Fight for $15, which proposes to more than double the federal minimum wage, has taken a demand that, just a few years ago, was seen as wildly impractical and turned it into winning policy, prompting plans for major wage increases in cities from Seattle to Los Angeles, Chicago to Kansas City. There is now an active campaign in Iowa, with nearly 1,000 people demonstrating in favor of a statewide raise in January.

Black Lives Matter, with a series of urgent and disruptive protests, has already provoked important changes, from the expanding use of body cameras by law enforcement to the increased community oversight of municipal police forces.

Around the issue of clean water, groups such as Iowa Citizens for Community Improvement (CCI) have totally changed the conversation, compelling a reversal by officials who previously refused to admit that a problem with water quality even existed in the state.

Social movements creating pressure through grassroots action routinely hear condemnation of their tactics. CCI’s methods, for instance, were labelled “unproductive” and “embarrassing” by then-Iowa Democratic Party Chairwoman Sue Dvorsky in 2011. More recently, critics of Black Lives Matter have stated that they “admire the cause and courage of these young activists” but “disagree with their approach.” These detractors are seemingly unaware that the same words were used to attack the civil rights movement of the 1960s—and that it was this very position that occasioned Martin Luther King, Jr.’s famous response in his 1963 “Letter from a Birmingham Jail.”

More than most politicians, Senator Sanders has recognized that, “no matter who is elected to be president, that person will not be able to address the enormous problems facing the working families of our country” without backup from reinvigorated grassroots movements. Rather than training all of our attention on political insiders fighting for office, we should acknowledge the critical contributions of those who, through insistent protest and determined organizing, create possibilities for change previously considered impossible. Instead of more politicians making promises, our country needs an uprising—and Iowans can be leaders in making this happen.

Paul Engler is founding director of the Center for the Working Poor, based in Los Angeles, and co-author of This Is an Uprising: How Nonviolent Revolt Is Shaping the Twenty-First Century. Paul is one of the founders of the Momentum Training, which educates hundreds of activists each year in the principles of momentum-driven mobilization.

Why Our Movements Need to Start Singing Again