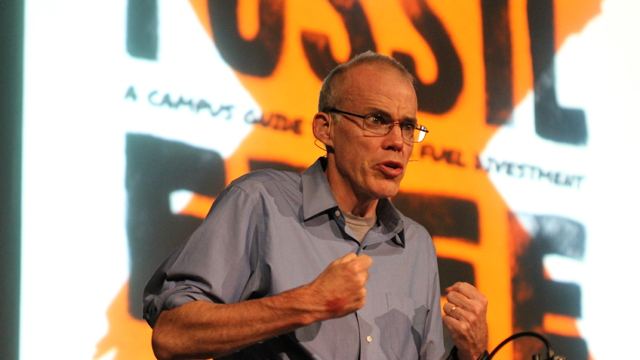 [Editor’s note: Bill McKibben, 350.org founder and author of The End of Nature, has written a new foreword for paperback edition of Mark and Paul Engler’s This Is an Uprising, released in fall 2017.]

Nonviolent direct action was the greatest technology invented in the 20th century—Gandhi, King, and the like were Einsteins of political science, uncovering deep new forces hitherto barely guessed at. But the synthesis of that work has been slow in coming. The noble work of Gene Sharp in compiling the history of these techniques has been invaluable, of course. But now, with This Is an Uprising, the Englers have put it all in a well-written and superbly readable volume.

The Englers, it seems to me, have written what will be for the foreseeable future the standard and definitive manual on how to conceive and organize nonviolent social movements. For those of us living amid the aftershocks of the Trump earthquake, this is perhaps the single most useful book we could have—it’s like rummaging through the wreckage after your plane crashes on an Andean mountain top and finding a guide to wilderness survival.

We’ve lacked such a book till now. I know, because when I was helping figure out the early stages of the fight against the Keystone pipeline, I looked in vain for something helpful. The best I could do was Taylor Branch’s history of the civil rights movement, so granular in its detail that organizers could learn a great deal by careful reading. But that was the story of one event; what we have in this volume is the condensation of nearly a century’s worth of data and experience.

The great insight of the work is summed up in the word ‘momentum,’ in the idea that the world can be transformed—and sometimes transformed quickly, not incrementally. This is a crucial idea, because many of the challenges we face (climate change being perhaps the ultimate example) simply won’t allow for piecemeal solutions delivered over great time–when your ice caps are melting fast, winning very slowly is another word for losing. But the speed with which change can come in so many areas is heartening: their account of the rise of the gay marriage movement should be a reminder not to despair.

And a reminder, too, that much of what we think of as “politics” is at least as deeply connected to culture. It’s culture that responds to disruption; it’s human hearts that are captured by the drama of disruption. The jiu-jitsu of unearned suffering lies at the heart of the potential of nonviolence—this is the counterintuitive atomic charge that Gandhi happened upon, though it must be said that Jesus, in his Sermon on the Mount, seemed to have a prescient understanding of the technique. Turning the other cheek turns out not to be a weak stance, nor does it need to come from a moral commitment to pacifism; the data and experience catalogued in This Is an Uprising make it clear that it is instead the tactically sound choice. Far tactically sounder, as it turns out, then violence—because, of course, the minute activists become violent they enter onto the preferred terrain of the status quo, which is adept at outgunning its adversaries. Bringing that status quo on to the terrain where we can win is the secret, and from the Salt March to Selma to Serbia to Standing Rock the lessons hold.

Successful uprisings demand a dozen other features surrounding that alchemical core, of course: enough structure to allow protest to continue and grow, enough messaging ability to avoid crippling backlash, enough discipline to prevent adventurers and agents provocateurs from taking over. The Englers cover them all, in enough depth to help activists make the choices they’ll need to make as campaigns develop. The historical examples are consistently useful—Americans in the time of Trump may have a great deal to learn from campaigns by Otpor and others, who showed how to deal with a personalized and autocratic state. And of course the book comes with cautionary lessons: it’s important to look at, say, the Arab Spring and understand how what seem to be sweeping victories can soon come to be, at best, small beginnings.

As society evolves, so will some of the techniques for changing it. Still, I expect that This Is an Uprising will be the well-thumbed companion of organizers across the planet for many years to come. It tells us what we need to know in order to stand up for a working future. You can read it for insight and understanding, but at heart it’s a cookbook: until you try out the recipes, you won’t really grasp just how powerful it is.

Bill McKibben is the Schumann Distinguished Scholar in Environmental Studies at Middlebury College, the founder of 350.org, an international climate campaign, and the winner of the 2014 Right Livelihood Award.

Does It Make Sense to Protest a President Who Is Not Persuadable?

Making Our Demands Both Practical and Visionary